This week Josh and I are going to deep dive into a topic we’ve covered on our old podcast, Overrated/Underrated. Our podcast is lovingly called “the show where two exes bicker pointlessly about nothing for a half hour” because, well, that’s what it is. Josh and I have individually documented what it’s like to work on this pod together on my blog, and while we’ve had our ups and downs, it’s a great project for us to do together!

I thought it might be fun to go a bit deeper into things that we enjoy and feel strongly about since our pod is only a half hour. Once a month, we’re going to pick a topic from the pod and we’re each going to post about something we’d have loved to explore further related to that topic!

Are ya ready kids?

Seriously, I can’t hear you because this is a blog, but you’re welcome for getting the Spongebob Squarepants theme song stuck in your head!

As Josh and I discussed on our podcast episode, I am a huge Spongebob Squarepants fan, while he never really got into it. Since Josh is an old fart, Spongebob came after his time. By the time Spongebob was released, he was twenty and no longer interested in a sea sponge who lived in a pineapple under the sea. I, however, was still a kid when Spongebob came out, so I was still watching Nickelodeon at the time and immediately became obsessed. Now, when I go back and watch past episodes, I am not only laughing at the under-the-sea hilarity, but I’m also riding a strong wave of nostalgia. Spongebob has developed a sort of cult following, and I think it’s possible that this following exists almost solely due to this nostalgia.

My first email address was related to Spongebob. Seriously, when I created my first email address, I thought it was the most fun, clever expression of my personality ever. I still remember calling my best friend on the phone at the same time as I sent her an email. “Did you get it now? How about now?” Spongebob became a staple in these formative, young memories. I now use that address for coupons and spam — you should see how many cashiers laugh as I give them my email for coupons. Back when I was in high school, I even recorded Patrick’s entire song “I Wrote This Song” from the episode “Sing a Song of Patrick” Season 5, Episode 3 to use as my ringtone. I wanted to hear Spongebob every time someone called me (which was way more frequent back then). Yes, I still know all of the words. The song is very impactful.

Spongebob became one of the biggest ways that I connected with my friends. We loved watching the show together and quoting Spongebob episodes back and forth to each other. In fact, my friend Rachel and I have a longstanding tradition where we send each other quotes on alternating days from our favorite shared franchises. At least half of our quotes are from Spongebob. This year, the first day of summer landed on my day to give Rachel a quote, and I was all too excited to give her Spongebob’s summer anthem.

Rachel isn’t the only friend that I relate to using Spongebob, either. Now, when I find other adults with a love of Spongebob, we have an instant connection. When I heard my past coworker Amber say “FLOOR IT?!” at random like Spongebob in driving school, I immediately knew we’d be buddies. Even alone, if I hear something that remotely sounds like a Spongebob quote, the entire line pops into my head. Just hearing or seeing the number “74” causes me to say “*ahem* seventy foooooooooour.” 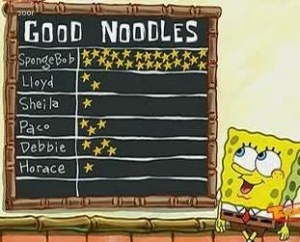 Did you get that one?

When I was in middle school and the Spongebob “Best Day Ever” all-night marathon happened, I just had to have a sleepover with all of my friends where we stayed up to watch Spongebob. My uncle/godfather who works for Universal Studios was kind enough to supply us with some Spongebob nightshirts to keep us cozy and fashionable throughout the night. It was an awesome time that was literally built around a Spongebob marathon. Sure, we had plenty of sleepovers, but this one wouldn’t have happened without our porous friend.

The Spongebob movie was another momentous occasion where my friends and I gathered together and headed to the movie theater. It was no question that we were seeing this cinematic spectacle opening day! Unfortunately, as any true Spongebob fan knows, after that first movie (which came out after the end of season 3 of Spongebob), Spongebob’s original creator Stephen Hillenburg left the show, and it was all downhill from there.

When Stephen Hillenburg left Spongebob, the tone almost totally shifted. I was able to stick with it for a while longer but the episodes got stranger, grosser, and creepier, and not in a good way. I essentially have decided that Spongebob Squarepants ended at season 5, and even then, those two seasons after Hillenburg left were not quite at the caliber that they used to be. Because of this, my love for Spongebob has been largely buried in my past. I stopped collecting Spongebob DVDs and memorabilia, and Spongebob no longer played on a continuous loop on my TV. It wasn’t even until writing this post that I remembered what a huge part of my life Spongebob was. It was a huge part of my young identity, and I almost completely forgot about it (I guess I should’ve checked if my shirt was on backwards, amirite?). Part of me is worried that if I go back and watch the episodes, nostalgia won’t be enough for me to enjoy them. I don’t want to hate something that I loved so much!

Spongebob will always hold a special place in my heart. While I am older now and enjoy different shows than I did when I was little, I will never forget the sponge who made me laugh so hard and inspired so many of my memories. Something Spongebob-related is definitely on my list of possible tattoos. Got any ideas?

Since I quote Spongebob oh so often, I thought I would add a list of my favorite quotes here. Narrowing this down to 10 was painful, but I didn’t want this post to go on for another 30 years…

Oh and you should probably just watch the entire episode “Krusty Krab Training Video” Season 3, Episode 18. I can’t just pick one quote from that episode, it’s all brilliant. Possibly the funniest 11 minutes of an animated kid’s show.

If you have any quotes that you love from this memorable show, share them in the comments and tell Josh how wrong he is about this gem!

You can check out previous deep dives below: