As Renata mentioned in her post, I’ll be continuing this week’s theme of diving deeper into the expansive library of Mario games. One of the things I initially lamented when we did the Mario episode of our Overrated/Underrated podcast was that I couldn’t discuss the earlier games in the series since Renata has never played them. Now, though, the entire history of Mario lay before me… and it is glorious! And while I can’t cover the entire litany of games in a single post, I do want to talk about what is potentially one of the greatest releases of all time: Super Mario All-Stars for the Super Nintendo Entertainment System (SNES).

Originally released in 1993 (and later followed in 1994 by version including Super Mario World), Super Mario All-Stars serves as both a “Greatest Hits” compilation of the early Mario titles and a full Remastering of 4 of the included games. Super Mario Bros., Super Mario Bros.: The Lost Levels, Super Mario Bros. 2, and Super Mario Bros. 3 were all given a fresh coat of 16-bit paint in addition to having their game physics tweaked to provide the optimal Mario experience. So without further ado, let’s talk about what makes each of the games on this cartridge so great. 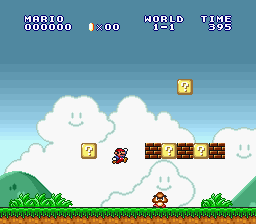 This game has been dissected and analyzed so many times that it’s hard to write anything that hasn’t already been said before. With simplistic controls consisting of a directional-pad and two action buttons, the original served as the entry-point for countless would-be Mario fans. In the All-Stars release, the tidy, palette-limited graphics were completely redrawn in 16-bits. Everything from the character sprites to the backgrounds and tilesets have been painstakingly re-worked to give SNES gamers the quintessential Mario experience. 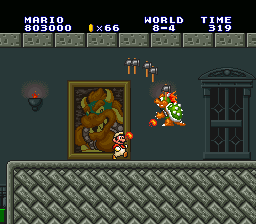 So “The Lost Levels,” as it came to be known in Western territories, is actually a bit of a misnomer. The official title of this game’s Japanese release is Super Mario Bros. 2. I know, I know… this doesn’t look like the Mario 2 you remember, and for good reason. This is the Mario 2 that was held back from a Western release for being “not graphically advanced enough” and “too hard for Western audiences.”

Now, before we all raise our pitchforks, let’s take a look at Nintendo’s reasoning here. Since this game is built on the exact same engine as the original Super Mario Bros., the graphical assets are for the most part identical. Sure, a few new sprites were added, such as the infamous poison mushroom, but there are fundamentally few differences in the aesthetics of the two games. Meanwhile, third-party games like Ghosts and Goblins, Gradius, and Commando were already gaining popularity in the west thanks to screens filled with a variety of multi-colored baddies all waiting to be mowed down. While the current retro-indie scene proves that flashy graphics are by no means necessary for a popular game, Nintendo had serious concerns that there just wasn’t enough to differentiate between this game and its predecessor in the eyes of Western audiences.

Next, we have the “it’s too hard” argument. Well, yeah. This game is hard. I mean, this game is HARD! In addition to adding the aforementioned poison mushroom, a new power-up that will straight up kill you if you touch it, Each of the levels is designed around forcing you to completely master a specific game mechanic before allowing you to progress. And we’re not just talking about clusters of enemies a la world 8-2 in the original. No, we’re talking about entire levels where you have to make blind jumps that carry you two to three screens away with the new “wind mechanic.” We’re talking about a fake final boss fight in the last level that can easily kill you if you don’t know you can just run right past it. What’s more, this game marks the first time that Mario and Luigi have different physics! Luigi was given his trademark high-jumps and slippery landings, and it caused more than a few falls of the already tiny ledges in the game.

As of All-Stars, though, Nintendo finally thought we were ready for this brand new, hellish experience. Spoiler alert: we weren’t. I still have nightmares about this game, but I’m glad we finally got the chance to play it regardless. 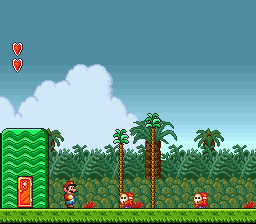 So it was decided that Nintendo wouldn’t bring the original Super Mario Bros. 2 to America. Western gamers were still clamoring for a sequel, though, and Nintendo wouldn’t have a proper Mario game ready to release over here for another couple of years. What were they to do? Why, take Yume Kōjō: Doki Doki Panic, an obscure game based on a special event tie-in with Japanese broadcasting company Fuji Television, and re-draw the 4 main characters as Mario, Princess Peach, Toad, and Luigi, of course! And thus, the game we have come to know as Super Mario Bros. 2 was born.

Now, it is important to note that this game wasn’t just chosen at random. It had the distinct honor of having been worked on by none other than Nintendo Entertainment Analysis & Development (EAD), the team given to Shigeru Miyamoto after his groundbreaking work on the original Super Mario Bros. In fact, thanks to this game’s prestigious pedigree, a number of core platforming staples had carried over into its development, making the later conversion fairly painless.

The result was a solid game that felt like a proper Mario sequel despite its origins. What’s more, many of the enemies introduced in this version of Super Mario Bros. 2 have gone on to become permanent fixtures in the core Mario franchise, including characters such as Birdo and Renata’s beloved Shyguys.

All-Stars took this a step further by reworking some of the original character designs to fall in line with their later iterations, further cementing the game’s place in Mario canon. 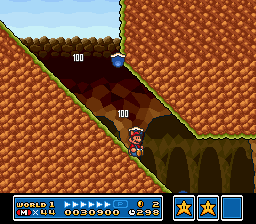 This is it. This is the game. This is the definitive 8-bit Mario experience right here! Super Mario Bros. 3 gave us so many of the things we associate with modern Mario games: a flight power up (in the form of the leaf), the Koopa Kids, the Tanooki suit, airships, and so much more. Nintendo knew this one was going to be big, so they closed out 1989 by building hype with the most 80s marketing campaign ever: The Wizard. That’s right, the movie built around Fred Savage occasionally remembering to take his little brother to California in-between playing Nintendo games and culminating in an event that gave America it’s first taste of what the future of Mario had in store by teasing us with two and a half minutes of in-game footage. And we ate… it… UP! Seriously, I remember the lines for this thing at the local movie theater. It was insane, but this was also before the internet was really a thing. Back then, we weren’t able to see multiple trailers and promos before a game was released. This was all we had, and the hype was real!

Fast forward to February of 1990. American gamers were rushing to the stores in droves to get the game they had been salivating over for months, a game whose marketing hype had set it up to be one of the greatest games ever made, a classic that would endure the test of time, and an experience like we had never seen. Then, the game did something no one expected. It didn’t live up to the hype… it surpassed it.

It’s no exaggeration to say that this is one of the most popular games of all-time, and the All-Stars release just builds upon everything that made it great. The already beautiful sprites are crisp and more colorful than ever, and the gameplay has been tuned and tightened to near perfection. There’s nothing more to say about this game, except… play it. You won’t regret it.
And there you have it. Super Mario All-Stars isn’t just some halfhearted “remaster” pushed out for a quick cash-grab. It is a love letter to the early games that made Nintendo the powerhouse it is today, and it’s a damn fine one at that!

If you want to read Renata’s deep dive into different versions of Mario Party, click here!

Josh Mohs is a writer, videographer, podcaster, and self professed "geek-of-all-trades." When he's not editing and contributing to this blog, he can be found either yelling at video games for the amusement of strangers on Twitch or being overly attached to his cat. View all posts by Josh Mohs