Do you often find yourself confused in yoga class? Do you feel discouraged because you don’t understand anything that the instructor is saying, even though everyone else seems to? Why is everyone lying on the ground? You want me to put my arm where? I keep hearing them say something about dogs. Are there dogs here? Do I get to pet them? WHERE ARE THE DOGS?

As a new student to yoga, I was also vexed by all of the new terminology that I would hear during class. While I may not know every yoga term out there, I’m here to give you the definitions of some common terms you hear in your run-of-the-mill yoga class.

Intention (n.) — something that you want to cultivate during class. Yoga instructors will often have you “set an intention” at the beginning of class to give you the opportunity to reflect on your body and emotions and decide what you want to really focus on. They never ask you for this intention, however, so you don’t get the chance to feel superior if your intention is better than anyone else’s or get a “Most Improved Intention” award after you practice for a while.

(Used in a sentence: My intention when I first started practicing yoga was to not get up and leave after the first 5 minutes and now it is to relax to the point where I don’t want to cause my coworkers bodily harm. Is this what personal growth feels like?)

Practice (n.) — typically used as a possessive “your practice.” The most widely accepted excuse in the yoga community to not do something. Used to explain that you’re pretty sure your body just doesn’t bend that way, and you’re not even going to try.

(Used in a sentence: The instructor told us to take any variation of a headstand that was in our practice last night, so I took some chips out of my bag and munched on them in the studio, explaining loudly that this was MY practice as my chip spit sprayed everywhere.)

Breathe into areas of tension (v.) — Yeah, nope. No clue what this means. With all of my expertise from practicing yoga (sporadically for like, a month), I still have no idea about this one. I’ve tried to breathe into my tense areas…I just find myself getting more tense as I think about it. I’m even feeling tense typing about it.

Bind (n.) — the technical term for “wrapping yourself up into a pretzel.” A bind is a way to wrap your one arm around yourself while in a pose. Some very gifted people can wrap their non-stretched arm around their backs, and thread it through their legs to grab their other hand. Can’t picture what I’m saying? Me neither! I’ve provided an illustration.

(Used in a sentence: Once I managed to maneuver my body into the first impossible pose of the class, the instructor told me that I could push myself with a bind, but I didn’t want to end my yoga class in the emergency room.) 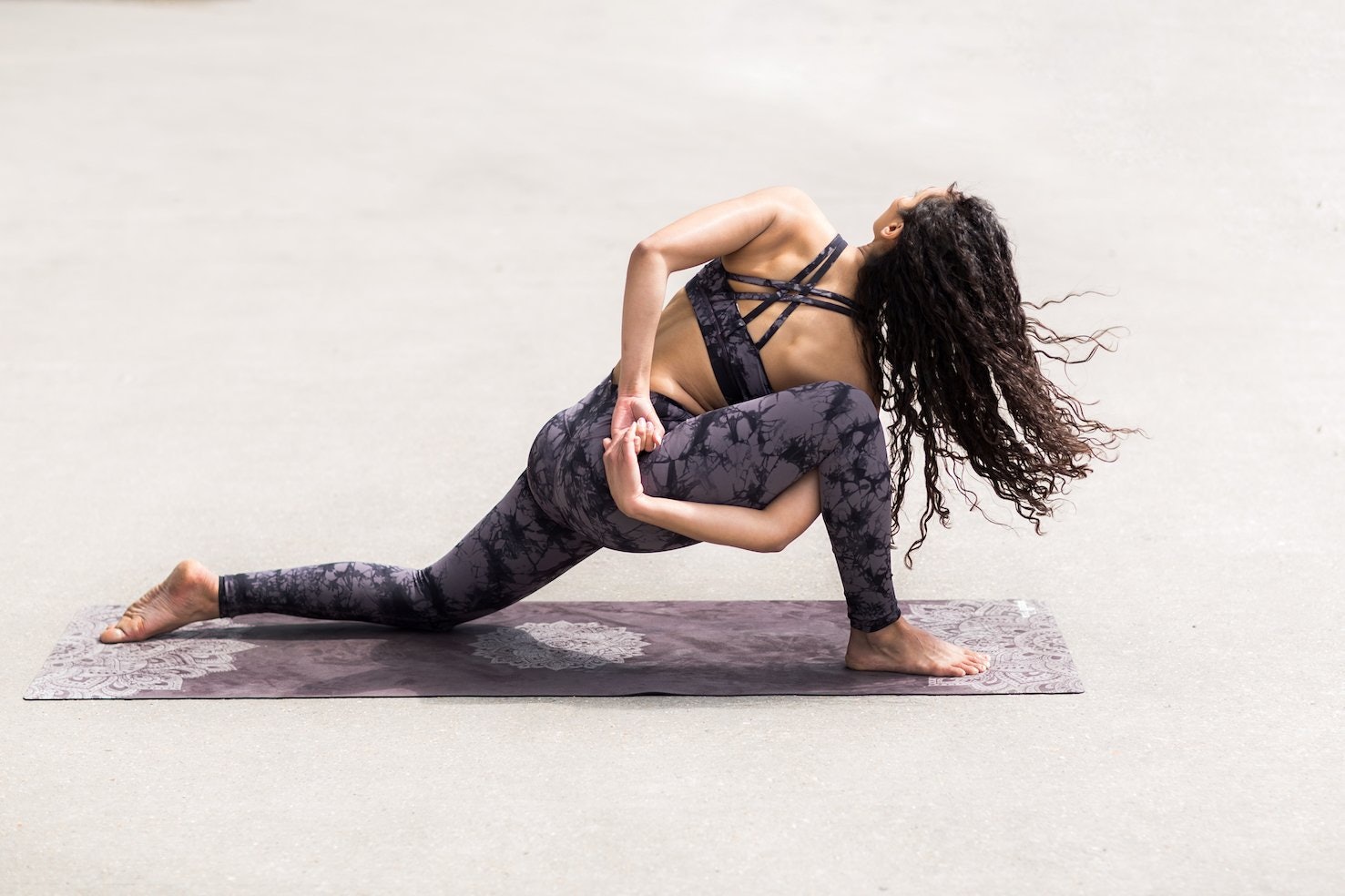 Downward-facing dog (n.) — a pose that is DEFINITELY NOT A RESTING POSE, NO MATTER WHAT YOUR LIAR OF A INSTRUCTOR TELLS YOU. Down dog is a common pose where you go onto your hands and feet and lift your hips into the sky, making your body look like an upside-down V. Some instructors will tell you that this is a resting pose. THEY ARE NOT TO BE TRUSTED.

(Used in a sentence: Every time the instructor says to rest in down dog, I curse at them angrily under my breath.)

Walking your dog (v.) — pedaling your legs while in the pose downward-facing dog. Unfortunately not an invitation to bring your dog (or yo-yo) to class or to leave class to go and take them for a walk. Often used as a way to move a bit while you are in down dog because resting in down dog sucks. The fact that instructors even allow students to do this proves that they recognize how uncomfortable down dog is, even if they don’t want to admit it.

(Used in a sentence: Today I learned that walking my dog in yoga class is not nearly as fun as actually walking my dog, unless it is freezing out, in which case, it’s a tie.)

Surrender into a pose (v.) — said by instructors when you are in a pose that is thought to be “relaxing.” No matter how uncomfortable you are or how much you can’t feel your toes on your left feet and oh god, are we going to need to amputate those?! When an instructor says this, they want you to basically melt into the pose like a graceful swan as opposed to holding it rigidly like a stressed out human just trying to survive yoga class.

(Used in a sentence: Once you’re comfortable with your legs wrapped around your neck, really surrender into the pose and relax into the moment.)

Shavasana (n.) — also known as corpse pose. It’s basically just laying on your back on the ground to help get you into a relaxed state. Because is there a point in doing any workout that doesn’t let you take a small nap at the end?! Sometimes yoga instructors will joke that you can spend the entire class in shavasana if it’s in your practice. What they don’t tell you is that everyone will judge you if you do that.

(Used in a sentence: My favorite pose is shavasana because it’s the only way to take a nap during a workout without being judged!)

I may not have covered everything, but hopefully, armed with this knowledge, you’ll be able to stride confidently into your next yoga class and practice your downward-facing dog with intention.

6 thoughts on “Yoga Terminology: Explained by a Sassy Semi-Beginner”