My parents, my partner, and I went to an escape room over the weekend and I cannot recommend this group activity enough. It was me and my partner’s first time escaping a room, and we all had a BLAST! (That joke would’ve actually been funny if you were there, because we had to blow open a door with a detonator heh heh…victorious picture of us below) 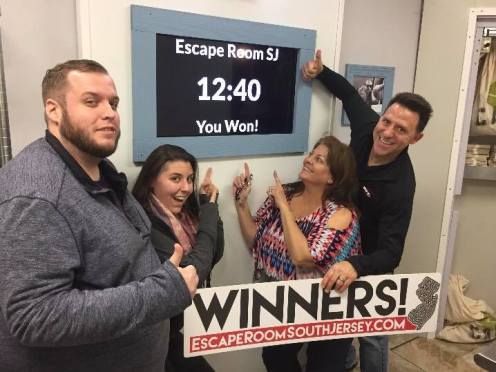 So now that I’ve officially escaped a room, I’m here to give you tips for escape room success and survival. If you haven’t done one before, you may find the tips below helpful (or just common sense, I don’t know your life). If you have, you still might find these helpful, or like me, wish you knew them going in. Most of these tips make sense in abstract, but there’s a difference between thinking of strategy beforehand and only thinking of it once you’re in the room and the clock is ticking.

My guess is there will be another set of readers who think that escape rooms are a fun form of entertainment, therefore you should just “wing it.” To those people I say: do you just walk around your entire life not planning in advance and overthinking every little thing you do or say?! Your life sounds so…peaceful.

I wanted to give one last note before I dive into my tips. While there are some details in these tips, I made sure not to give away any major clues or detailed strategies in here, as well as withheld which escape room we went to. I don’t want to ruin it for anyone else, just looking to give some snarky advice on what to expect when you’re locked in a room with a group of people and you have no idea if you’ll ever get out and see the light of day again.

When the idea of escape rooms was originally introduced to me 5 years ago, my mom told me that they involved zombies chained to one wall of the room where the chain got longer as the hour went so that the zombie could more easily catch you.

Oh yes, solving riddles while trapped in a room with a brain-eating zombie making guttural noises and coming closer to me is my exact idea of fun. How ever did you know?

As someone who has never been into things like horror movies or haunted houses and is actually sane, I told mom that they could go have fun with their adventure of terror and instead I would go and do LITERALLY ANYTHING ELSE.

So you can imagine my hesitation when my dad suggested that we go to an escape room this weekend.

In order to assuage my fears, he looked up the details on all of the escape rooms in the area. For me personally, if the site said “not suitable for children under 15 years old,” it was a no-go. Because I am obviously a 25 year old with the mentality and bladder of that kid who had to leave the sleepover because the scary movie scared her so much she peed herself and had to go home.

Okay, so that never actually happened to me, but I do have a tiny bladder. And hundreds of stuffed animals.

Be sure to do your research on the escape rooms in the area in advance to make sure that you can handle the room and the scenario. I have no idea if any of the themes might be triggering for some people or actually scary enough to cause someone to go into cardiac arrest, but it is always good to research ahead of time to know what you’re getting into.

Conversely, if you’re looking to go to a scary escape room, not only do I think something is deeply wrong with you, but also, you should do your research and find something that sounds appealing to you. If you went to our escape room hoping to be scared, you would have been sorely disappointed.

2. Everything Is a Clue

This one may seem obvious, but I think it is worth spelling out. Literally everything is a clue. Escape rooms aren’t your great aunt’s house at Christmas time. They aren’t full of pointless decorations and old lady smell.

Everything on the wall is a clue. Every piece of paper with something written on it is a clue. Turn everything over that can be turned over and look under all of the props. Everything is a clue.

Well, everything with words at least. There are some things that are actually just props and we definitely spent a disproportionate amount of time carrying around 5 plastic tomatoes, 3 plastic dinner rolls, and 2 plastic shrimp just SO SURE that they meant something. It got to the point where I was starting to assume that we were supposed to perform an Old Testament-style miracle and multiply them to feed everyone in the facility.

Anyone? No? It’s okay, I have a better one about that sermon, anyway…believe it or not…

If you’re really looking to take an escape room seriously and try to beat the record for that room, I would recommend having one person in your party literally designated to taking note of everything in the room. There will be several times where you will need to reference some detailed information given to you, and if someone has already gathered all of the information, you don’t have to waste time retracing your steps.

3. If you think you figured it out within the first 15 minutes, you’re wrong

When you’re crunched for time and scurrying around like crazy, you may not be thinking clearly. Allow me to be the voice of reason in your head. Just because you opened a door, does not mean that you escaped the room. Don’t get cocky, you still have a long way to go.

My partner opened up the door to another room within 10 minutes of us being in the escape room and solving riddles. I was confused and sort of hopeful. Wow, we did it that fast? I blew on my fingernails and rubbed them on my shirt.

But we hadn’t escaped, of course! We had just made it into another room, where most of the puzzle was actually housed. We had plenty more to do, and a much larger room with many more details and clues that we had to solve.

Don’t feel discouraged when you realize you have more to do, get hyped to solve more puzzles and have more opportunities to yell at each other!

And speaking of yelling at each other…

4. Go with people you trust

Nah, it’s definitely the first one.

Either way, bring people with you whose intellect you trust enough to blindly listen to no matter what they’re telling you to do. Escape rooms simulate intense situations mostly due to the time restrictions, which means that everyone is a little on-edge and there’s just not always time to explain every step to each person in your party. So take people who you know you can trust to guide you in the right direction even if you don’t necessarily know what they’re thinking.

Because when someone is standing behind you holding the clues and yelling at you to put things in a certain order, you’re just wasting time if you’re staring at the task and asking why over and over.

Yes, Dad, that was directed at you…

Overall, we were able to escape without yelling at each other, but my dad and I did have an incident where he wouldn’t listen to my directions even though I CLEARLY KNEW WHAT I WAS DOING. Ahem.

The bottom line is: bring people you can follow blindly and you’ll most likely make it out quicker.

5. The clues are there to help you

I’m cringing slightly while writing this one, because I’m still salty that we needed 2 out of the 3 available clues to escape the room.

I don’t know if they are all set up this way, but in our room, we had a screen (henceforth known as the Almighty Screen) that showed us our context video before the escape room began and was the only source of communication we had with the outside world (besides 4 working cellphones and a door that the escape room worker assured us was unlocked if we needed to get out for any reason).

We were told that if we needed a clue, we should ring a bell and the clue would appear on the Almighty Screen. When you’re stressed because you’re crunched for time, you really won’t be able to think clearly. Since escape room workers know that, they offer you a way to get clues. I think it’s just an excuse to watch us stupidly scurry around like mice and make mistakes, but that’s just me. To be entirely fair, we actually needed the two clues that we asked for, but that doesn’t mean that I can’t feel bitter!

Not only did they provide us clues on the Almighty Screen, but when we followed one of the clues exactly and just didn’t push the buttons we were pressing fast enough, the Almighty Screen let us know what we had to do. THE ALMIGHTY SCREEN KNOWS ALL!

So use the clues and pay attention to the screen, got that? No need to be a hero, you’re trying to escape the room before the time runs out, not trying to escape Sid’s house before he lights you on fire with a rocket!

While I really do think these tips are helpful, as cheesy as this sounds, escape rooms are really meant to be a fun bonding experience for those in them.

Or a contentious pit where everyone starts yelling at each other and resorts to cannibalism. Only you can decide.

I recommend an escape room for either vibe you’re going for, and hopefully with these tips, it can be not only an enjoyable, but also a successful experience. And remember, the murderer is always the person you least expect. Oh wait, wrong thing.

12 thoughts on “Tips for Surviving (and maybe even escaping!) an Escape Room”